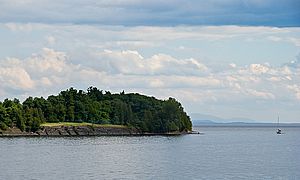 Schuyler Island about 1/3rd of a mile northwest of Schuyler Reef, site of the 1963 shipwreck. Photo by John Weiss via Flickr.com.

The owners of a tugboat that sank on Lake Champlain in 1963, the week before President Kennedy’s assassination, has agreed to begin efforts to remove any residual fuel left on the boat. The tug, an oil tanker, struck Schuyler Reef and sank in waters over 100’ deep. According to an AP report, McAllister Towing and Transportation Co. is negotiating with a Buffalo company to send a diver to the wreck to see if any fuel remains aboard. The expedition had originally been planned for late May, but high lake levels forced a delay.