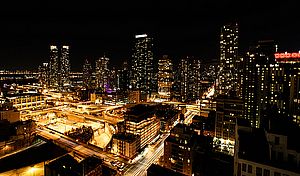 The New York State Public Service Commission has approved construction of a high voltage direct current transmission line to deliver electricity from generating sources in Quebec to the New York City area. The original application was filed over three years ago and negotiations towards approval spanned almost 16 months.

Once built, the power line would have a length of approximately 335 miles from the generating source in Quebec to its southern terminal in New York City. The cable would be buried at varying depths up to 3 feet under Lake Champlain and the Hudson, Harlem, and East Rivers. The cables would cross the border under Lake Champlain and run southward to the Town of Dresden north of the Village of Whitehall. On its way to the Hudson, the cables would be routed briefly along State Route 22 and then parallel rail lines until entering the Hudson River in the Town of Catskill.

In issuing their decision, the New York State Public Service Commission determined that the facility represents the minimum adverse environmental impact. In addition to New York State overview, the project will require a federal Environmental Impact Statement and permits from the Army Corps of Engineers. LCC lobbied to ensure that the underwater portions of the project were routed to avoid environmentally sensitive areas including wetlands and the Ticonderoga sludge bed. Additionally, we successfully advocated for a special fund to be available for water research and protection. As a condition of approval, the applicants will donate over $117 million to establish and maintain a Hudson River and Lake Champlain Habitat Enhancement, Restoration, and Research/Habitat Improvement Project Trust to be used to study and to mitigate possible impacts of the underwater cable on water quality or aquatic habitat.