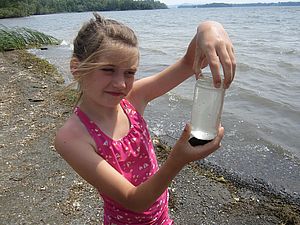 How much do Vermonters value a clean lake? Photo by Sheila Chairvolotti.

Legislators in Vermont pondering how to fund Lake Champlain clean-up efforts might be encouraged by a new study coming out of the University of Vermont suggesting Vermonters are willing to put up some money. The average survey respondent was willing to pay $40 according to the study. While 35% of respondents did not want to pay any additional fees for water quality, 65% showed a strong willingness to pay. People who moved to Vermont more recently were more likely to be willing to pay, as were older and more educated respondents. The distance respondents lived from Lake Champlain did not seem to factor into their response.

Researchers used multiple questions and question types gathered through two broad-based surveys to arrive at the $40 figure. One survey was a public opinion poll performed during the summer of 2013, specifically for this study. The second source was an annual Vermonter Poll conducted by Vermont’s Center for Rural Studies.

The summer 2013 poll focused on acceptability of different fundraising mechanisms. The most acceptable sources of revenue for water quality projects were stormwater fees and one-time development fees. Each of these were acceptable to almost 60% of respondents. Fewer respondents, 34%, were willing to accept increases in broad-based taxes.

Unfortunately, $40 may not be enough to reach water quality standards in the lake. A $20 per year water utility tax and a $20 per year increase in vehicle registration fees, the two funding sources the surveyors targeted in the Vermont Poll, would raise just under $16 million per year. Vermont DEC previously reported that an investment of $156 million would be needed annually over ten years in order for the lake to achieve standards.

Meanwhile, the state has proposed increasing funding for water quality initiatives by assessing a fee on commercial, industrial, and institutional impervious surfaces and levying an excise tax on fertilizer. This approach leaves out residential areas and would raise less than $1.5 million combined annually.