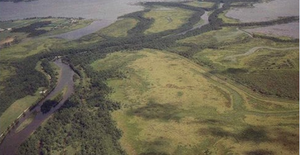 Vermont has declined to make best management practices mandatory for farms in the Missisquoi Bay watershed.

Vermont State Agriculture Secretary Chuck Ross issued a ruling that he would not impose best management practices on farmers in northwestern Vermont as a way to improve water quality in Lake Champlain. Ross had been petitioned by the Conservation Law Foundation to require such practices on lands identified as critical source areas, places that combine a phosphorus source (from soil type or management) with a landscape position that allows the pollution to be delivered to waterways. LCC had filed comments in support of the petition. While many farmers have implemented practices to reduce pollution and soil erosion we can't depend on voluntary actions, especially in areas like Missisquoi Bay where water quality is already compromised.

In a decision issued last week, Ross noted there are not enough resources available to ground truth the location of such areas and to help farms comply with any mandatory best practices. A study conducted by Stone Environmental identified pollution loading from critical source areas in the Missisquoi Basin, but used modeling and assumptions about land practices rather than field investigation to locate them. Ross also noted that much of the work the petition sought to mandate was already occurring in the watershed, or would be accomplished by proposed revisions of the Accepted Agricultural Practices, the state’s existing mandatory enforceable regulatory standards.

LCC is disappointed in Secretary Ross’s decision. There should be no excuse for farmers not to apply best management practices on lands identified as critical source areas, and we recognize that many already have. Land in hay-corn rotation contributed 29% of the total phosphorus load according to the model; the mere presence of a hay-corn rotation on certain soils with certain slopes generates excessive pollution loading. Mandatory measures are needed for recalcitrant producers who have not already implemented best management practices. Businesses subjected to stormwater management regulations need to provide different types of solutions for different locations based on soils and slopes; farmers should not be exempted from such heightened scrutiny. Click here to read the Secretary's ruling.