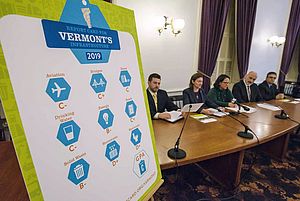 The American Society of Civil Engineers presented its 2019 report in a press conference at the Vermont State House. Photo courtesy of VT Digger.

In its 2019 report card, the Vermont section of the American Society of Civil Engineers (ASCE) gave the state’s infrastructure a “C” – the same grade it earned in the last report card five years ago. The report was broken down into several areas of infrastructure, with stormwater and wastewater infrastructure both receiving a D+, the lowest grades of the report. Civil engineers identified that the state is facing over a billion dollars in investment gaps over the next 20 years for stormwater alone.

The ASCE gave the country’s infrastructure an overall grade of D+, which is defined as “poor and at risk (for failure)”. They estimate that raising this score to a B, which is considered adequate, would require a two trillion dollar investment.