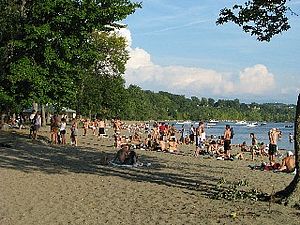 Sand and waves, suntan lotion, bathing suits, a child’s plastic pail and shovel for building castles. Spending a day at the beach is a long standing summer tradition, but did you ever wonder why there aren’t more beaches? Why do beaches form along some coves on Lake Champlain but not others?

Most of Lake Champlain’s beaches have two things in common, they are north of outlets to large rivers and they face south. Rivers feed beaches by supplying sand. The sand is deposited along the lake shore the moving water loses energy and speed as it enters the lake. Imagine running down a street when suddenly the road in front of you is blocked by pedestrians; you too would be forced to slow down and weave around people. As rivers enter Lake Champlain their running water merges with the mass of comparatively stagnant water in the lake. As moving water slows, it loses energy and thus its ability to carry sediment. Sensibly it drops the heaviest sediment first – sand. Other particles, silt and clay, are carried further out into the open lake.

So why are the beaches north of river outlets and facing south? Back to our running analogy; imagine that the crowd of pedestrians is moving in one direction. Once you have entered the crowd it would take much more work to move in a direction against their flow. Currents in Lake Champlain generally flow north toward the lake's outlet aided by prevailing southerly winds. As river water enters the lake it too flows north as it joins the current. If there is a suitable expanse of relatively flat land facing south, winds and the current push sand onto that land forming a beach.

Under natural conditions, the dunes on beaches change seasonally. During the summer, lake levels are low, and an expanse of sand is exposed between the dunes and the water called the back shore. This is where you set up your blankets when visiting the beach. Hot weather dries the sand and wind picks it up and re-deposits it on the dunes further inland. During the winter, the inland migration of sand is reversed. High energy winter and spring storms send waves crashing against the beach and the closest dunes. Each wave scoops up some sand and drags it into the lake. Additionally, ice floes near shore incorporate sand and then drift away from shore. Since sand is heavy it usually doesn’t go far, rather it replenishes the back shore and forms a sandbar a short distance out from the beach. Sandbars help dissipate the energy of storms by causing waves to break farther from shore. The cycle of being torn down in the winter and rebuilt in the summer makes sand dunes dynamic places.

Dunes move not only on a seasonal time scale, but on a geologic time scale as well. As lake levels fluctuate due to glaciers or global warming the beaches move inland or toward the water. There is evidence that lake levels have been rising over the past few thousand years. Amongst the dunes at Plattsburgh Municipal Beach you can find old stumps, suggesting that the area now occupied by the dunes was once part of a forest. Beneath the dunes in Alburg, Vermont is a layer of peat, decayed moss, which suggests that the area the dunes now occupy once sported a very different ground covering, perhaps a wetland or conifer forest.

Few plants can make a living in sand dunes. Sand particles are relatively large (compared to clay) so water runs through the dunes quickly leaving little in storage for dry times. The absence of water also causes surface temperatures to fluctuate wildly within a day (think of walking over sand in bare feet on a typical summer day at 2:00 in the afternoon compared to 8:00 in the morning). Finally, sand offers few of the essential nutrients plants need. The roots of plants that do survive (particularly beach grasses) hold the dunes together against the onslaught of winter waves by knitting a matrix below the surface of the dunes to which sand particles cling.

There are three plant species in the Champlain Basin found only on beaches:  American Beach Grass, Beach Pea, and Beach Heather. Though these plants can be prolific on the sands of beaches and dunes, their habitat is very restricted. They are known from only six beaches around the Lake and no beach contains all three. Populations of these plants are more common along the oceans suggesting our populations are relics of a time when Lake Champlain was a saltwater sea. Then, seeds could have traveled via a saltwater corridor through the St. Lawrence and Richelieu Rivers to establish on the shores of Lake Champlain. Indeed, strains of American Beach Grass and Beach Pea on the shores of Lake Champlain are genetically distinct from their maritime cousins. Our American Beach Grass will flower up to two months earlier than comparable populations along the Atlantic.

The greatest threat to beach dunes and dune-adapted plants is development of shorelines. Who wouldn’t want a house right on the beach? Incrementally, houses and developments have popped up on beaches throughout the Champlain Basin leaving only a few examples of natural beaches left for the public and for the plants.