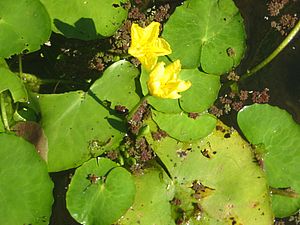 Yellow floating-heart has been in the lake for years, but spread more aggressively this summer. Photo by Glenn Miller, Oregon Department of Agriculture.

Yellow floating-heart (Nymphoides peltata) is a non-native, potentially invasive species. It likely got into the lake through the Champlain Canal. The species has been here for many years, growing in shallow quiet bays. In other parts of the country thick mats of the plant have caused problems for boaters and crowded out native species, but in Lake Champlain its distribution has been limited to small areas of the South Lake where populations have caused few problems. That may be changing. Staff from the Vermont Department of Environmental Conservation (VT DEC) reported that in the summer of 2013, for unknown reasons, populations of yellow floating-heart increased dramatically. The plant has rounded heart-shaped floating leaves about 3-10 cm in diameter. Leaves emerge from a long rooted stem that can support a loosely branched group of several leaves, unlike native floating plants that only support one leaf per rooted stem. Leaves typically have a wavy, scalloped edge and purplish undersides. Flowers are showy with five distinctly fringed petals. They sit above the water surface on slender stalks with 1 to 5 flowers per stalk. Lake users are advised to keep an eye out for this species in the coming summer and let us know of any sightings.