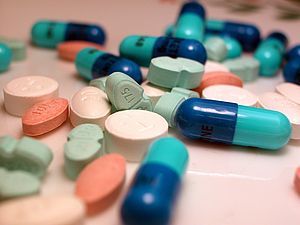 Protect our waterways from pharmaceutical contamination by disposing of them properly at a Take Back Collection Day. Photo by morguefile.com.

Federal and state agencies are teaming up to host a National Prescription Drug Take Back Day on Saturday, September 29, 2012 from 10:00 AM until 2:00 PM. LCC encourages everyone to check medicine cabinets for unwanted, unused pharmaceuticals and safely dispose of them at a nearby collection site. More than 1.5 million pounds of medication were removed from circulation during four previous National Take Back Days.

For communities without a permanent drug drop box, participating in a National Take Back Day is a positive step against drug abuse and theft and towards protecting water quality.

Keeping unneeded medications at home increases the risk of illegal use or theft and possible poisoning from accidental ingestion, particularly among young children. According to a National Survey on Drug Use and Health, persons between the ages of 12 and 17 abuse prescription drugs more than cocaine, heroin, and methamphetamine combined. Statistics issued by the Centers for Disease Control and Prevention indicate that in 2010, enough prescription painkillers were prescribed to medicate every American adult for an entire month. Deaths from prescription drug overdoses now kill more people every year than traffic accidents.

The two main sources of pharmaceuticals in the environment are excretion and disposal. Some chemicals are not metabolized by the body and remain active after they are excreted. Most people flush their unused medicines down a drain. Although wastewater treatment facilities are designed to treat sewage, they can not effectively remove all the active drug compounds contained in medications. Many studies in the last ten years have detected pharmaceutical compounds in treated wastewater discharges, as well as lakes, rivers, and groundwater. According to the United States Geological Survey (USGS) over 80% of waterways tested in the US show traces of common medications such as acetaminophen, codeine, hormones, blood pressure medicine, and antibiotics. A 2008 investigation found that at least 46 million Americans are exposed to prescription drugs through their drinking water.

Pharmaceuticals are specifically designed to affect biological organisms. We don’t know the chronic or synergistic effects of exposure to the ever-changing cocktail of pharmaceuticals in our waterways. At current levels, pharmaceutical residues are unlikely to pose an immediate risk to human health, but the long-term consequences of individual chemicals and combinations of chemicals are unknown, especially as concentrations rise. Aquatic organisms are even more vulnerable because their exposure is more constant. Endocrine disruption (the ability to mimic or block hormones and disrupt the body’s normal functions) is the most widespread and documented effect from pharmaceuticals. Chronic exposure to endocrine disruptors can feminize fish and limit their ability to reproduce.

Properly disposing of unused medicines at a Take Back Collection Dayreduces the risk that prescriptions will be mishandled and end up on the street or in the lake.