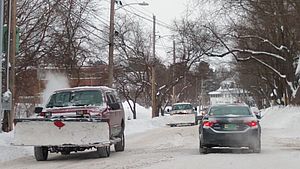 The Randy Preston Road Salt Reduction Act, a bipartisan bill that will help to reduce road salt pollution in the Adirondack Park, was signed into law by Governor Cuomo on December 2, 2020. The bill passed both houses of the New York Legislature in July with nearly unanimous support. The Adirondack Park contains more than 11,000 lakes and ponds, and over 30,000 miles of rivers, brooks, and streams. Lake Champlain forms the eastern border of the Park and a significant portion of the New York portion of the Lake Champlain Basin is within Park boundaries.

The legislation was named after Randy Preston, who served as Wilmington Town Supervisor until his death from brain cancer in 2019. Preston was co-chair of the Adirondack Road Salt Working Group and vocal advocate for reducing salt use to protect drinking water and waterways.

“We thank Governor Cuomo and legislative leaders for addressing road salt pollution now, before it becomes as widespread and damaging to the environment and economy as acid rain,” said William C. Janeway, Executive Director of the Adirondack Council, which started working with the State Transportation Department on road salt in 2006. “We should have safe roads and clean water. Corrosive, salty water is bad for everything it touches: lakes, rivers, fish, roads, cars, bridges, driveways, pumps, plumbing, and people.”

“Drinking water across the Adirondacks has been compromised by road salt contamination,” said Dan Kelting, Executive Director, Paul Smith's College Adirondack Watershed Institute. “Our testing shows a strong correlation between salty water and state-maintained highways. The problem is identified. Now we need to fix it.” The Watershed Institute’s tests have shown that salt leaching into groundwater is making streams saltier in the summer and releasing heavy metals and other toxins from sources that would otherwise remain harmless.

“Signing this bill into law is a big step forward for protecting Adirondack waterways by putting science, testing, and road salt reduction solutions on the ground Park-wide,” said Kelley Tucker of the Ausable River Association. “Successful pilots in the Lake George region and on Mirror Lake have shown reductions in salt use are possible while maintaining public safety. Mirror Lake is one of just a handful of lakes nationwide that has had the natural turnover process interrupted by an accumulation of salt at the bottom of the lake. A lack of turnover results in low-oxygen at the lake bottom, threatening native species such as lake trout and making the lake susceptible to harmful algal blooms. Indeed, Mirror Lake experienced its first harmful algae bloom this November.” (See article in the Water News from Near and Far section of this issue.)

To learn more about road salt, its impacts on the environment, and how to take action to reduce winter applications, check out LCC’s Clean Lake Tip, Take a Break From the Winter Salt Shake.