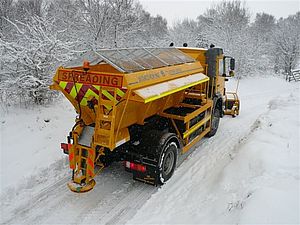 Salt flavors our food and keeps our winter travels safe, but it can have a negative impact on waterways. According to the United States Geological Survey (USGS), 20 million metric tons of road salt are spread annually in the U.S.—equivalent to approximately 20 million elephants. Applying less salt to roads and sidewalks can improve the health of the Lake Champlain Basin’s waters.

The most common form of salt is a compound comprised of the two ions sodium and chloride. Oftentimes, the type of salt we spread outside is the same as table salt. Salt decreases the freezing point of water because it inhibits water from forming organized crystal structures (ice)—this process is referred to as freezing point depression. Sodium chloride is only effective at 16 degrees Fahrenheit (-9 degrees Celsius) or warmer. Other forms of road salt, calcium chloride and magnesium chloride, are effective in colder temperatures.

Salt can also disrupt natural lake processes, such as seasonal mixing. A lake bottom zone dominated by salt can create a chloride-rich and dissolved oxygen-poor environment, known as anoxic water. In the spring, heavy water typically sinks and light water floats, mixing and distributing nutrients for biological processes such as plant growth. As spring progresses to summer, an unmixed waterbody forms a warm layer of water on the surface; in general, gases like oxygen are more soluble in cold water than warm water. Together, the oxygen-poor lake bottom and warm surface waters can sandwich fish into an ever-narrowing middle zone.

If you spread salt beyond the food you eat, be it a front stoop, driveway, or parking lot, there’s an opportunity to maintain safety and improve water quality. According to the Lake Champlain Basin Program’s 2019 Technical Report #86, annual chloride concentrations between 1990 and 2017 increased in all but two of Lake Champlain’s tributaries—the LaPlatte and Pike Rivers. Kris Stepenuck, Associate Director at Lake Champlain Sea Grant Institute, suggests four actions folks can take to reduce salt applications in the winter:

Whether at home or on a major road, the application of abrasives such as sand are also helpful in reducing salt applications, with the caveat that the sand needs to be cleaned up in the spring.

If you’re employed by a municipality or are a private contractor, consider applying liquid salt (brine) instead of granular salt pre-storm and during a storm. Brine uses 25 to 45% less salt and achieves the same results. The use of a plow truck with a segmented blade or other type of alternative blade technology can help to mechanically remove as much snow and ice from the pavement as possible, therefore reducing the need for salt applications. Through the Sustainable Winter Management (SWiM®) program, private applicators can learn how to keep people safe while also reducing road salt.

There are multiple ways that Vermont and New York entities have taken action to reduce road salt and there are always ways to get involved. Lake Champlain Sea Grant (a partnership between the University of Vermont and the State University of New York College at Plattsburgh) educates winter maintenance professionals in sustainable salt use practices that maintain safety, reduce the use of salt, and save money. They host or co-host workshops and conferences, such as the Adirondack Champlain Regional Salt Summit and the Lake Champlain Watershed Deicing Conference. AdkAction, a New York nonprofit, creates projects that address unmet needs, promote vibrant communities, and preserve the character of the Adirondacks. Municipalities can take a Pledge to Reduce Road Salt on AdkAction’s website—to date, 26 municipalities have signed on. In addition, the Randy Preston Road Salt Reduction Act was signed into law by New York Governor Cuomo in December, 2020! AdkAction and partners played a key role in achieving this milestone: "This legislation creates a Task Force and a three-year pilot program to implement data-driven salt reduction tactics while maintaining safe roads for winter drivers. This much-needed pilot program will work towards halting the spread of salt pollution into our streams, lakes, and most importantly our drinking water." See NY Road Salt Reduction Act Signed Into Law article in this issue for further details.

Without compromising your safety, think about how you can take breaks from the winter salt shake this season and improve the health of waterbodies!