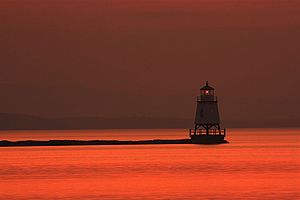 In early December TDI New England filed a state permit application seeking approval for construction of a 154-mile underwater and underground transmission line that would deliver 1,000 MW of hydroelectricity to the Vermont and New England grid. The transmission line would originate at the U.S.-Canadian border and travel underwater down Lake Champlain to Benson, Vermont, and then be buried along existing rights of way or on land owned by TDI for the route to Ludlow, Vermont. TDI hopes the project can be completed by 2019 and estimates the cost to be approximately $1.2 billion. LCC will be closely tracking the progress of the permit application as it moves forward.

The application (referred to as a “Section 248” application) was filed with the State of Vermont Public Service Board. The Public Service Board will now review the project, and if approved, issue a Certificate of Public Good, which will detail the terms and conditions under which the project may be constructed and operated. The project will also require permits from the U.S. Department of Energy and the U.S. Army Corps of Engineers.

TDI recently received approval to run a similar underwater line on the New York side of Lake Champlain to serve downstate New York markets. That 333-mile transmission line will also be installed both underground and underwater. It will originate at the US-Canadian border and run most of the length of Lake Champlain and through parts of the Hudson River. LCC lobbied to ensure that the underwater portions of that project were routed to avoid environmentally sensitive areas including wetlands and the Ticonderoga sludge bed. Additionally, we successfully advocated for a special fund to be available for water research and protection. As a condition of approval, the applicants will donate over $117 million to establish and maintain a Hudson River and Lake Champlain Habitat Enhancement, Restoration, and Research/Habitat Improvement Project Trust to be used to study and to mitigate possible impacts of the underwater cable on water quality or aquatic habitat.