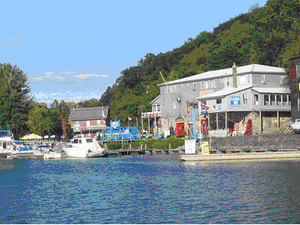 Developers have proposed an electric transmission cable for the bottom of the lake. The cable would extend from Rouses Point to Whitehall (shown above) and then on to New York City. Photo by Lori Fisher.

The New York State Public Service Commission (PSC) conducted a series of public hearings about the proposal to place a cable underneath Lake Champlain to transport electricity to New York City.  LCC testified about concerns regarding impacts to the lake and the overall need for the project. The PSC plans to hold evidentiary hearings in early 2011. LCC has applied for active party status in the case. The power line proposers must begin construction by fall of 2011 in order to qualify for federal loans.